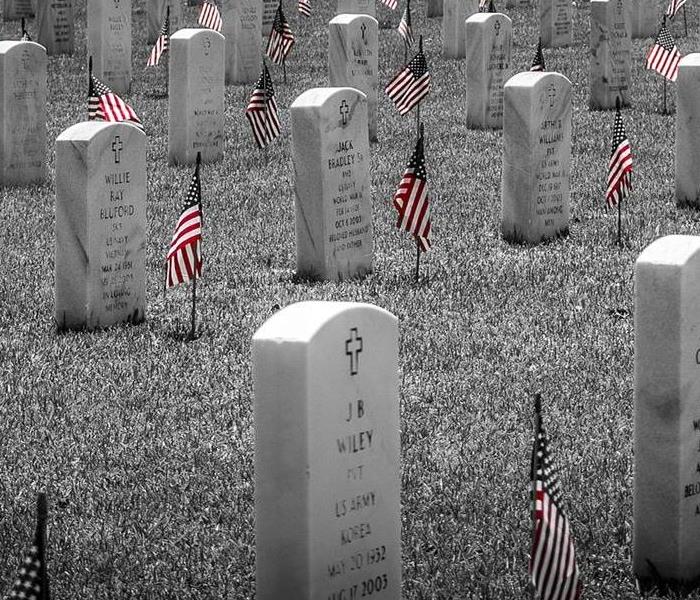 We will always remember

Can you believe it is already May? Weren’t we just covered in snow from a blizzard?

I know we here at SERVPRO of Cheyenne are hoping that May brings us some beautiful weather for lots of outdoor time, as the month of May has some pretty significant holidays for us to celebrate.

First, there is Cinco de Mayo; which, as always, falls on the 5th of May. Many of us associate this holiday as Mexican Independence Day, celebrating with Margaritas and delicious Mexican food. However, Cinco de Mayo is not actually Mexican Independence Day at all, which is celebrated on September 16th. Rather, Cinco de Mayo is a day that commemorates the Mexican army's victory, on May 5, 1862, over France at the Battle of Puebla during the Franco-Mexican War (1861-1867). This from www.calendar-365.com. However, here in the US, we do celebrate American-Mexican culture and heritage on Cinco de Mayo as well. It is a wonderful day to educate about and celebrate the culture and history of Americans of Mexican descent.

Who hasn’t made the macaroni necklace or handcrafted a card for their mom on Mother’s Day?

Interestingly though, Mother’s Day has been observed in some form since the ancient Greek and Roman times. It also has a rich history for the United States, dating back to the Civil War, as a peace movement and the meeting of groups of mothers whose sons had fought or died in the American Civil War. According to www.history.com, “The official Mother’s Day holiday arose in the 1900s as a result of the efforts of Anna Jarvis, daughter of Ann Reeves Jarvis. Following her mother’s 1905 death, Anna Jarvis conceived of Mother’s Day as a way of honoring the sacrifices mothers made for their children.” I highly suggest going to their website to read more about the history of Mother’s Day.

History aside, we all need to make sure we honor the mothers, step-mothers, grandmothers, foster mothers in our lives to make sure they know how much we love and appreciate them.

In May we also celebrate a truly valuable section of our society. Those who serve and have served our nation in the Armed Forces.

May 18th, 2019 is Armed Forces Day. On this day we pay tribute to all of the men and women who are currently serving in the United States’ armed forces. Per calendar-365.com, Armed Forces Day dates back to August 31, 1949. It was meant as a day to combine the separate holidays to commemorate each branch of the military; Army, Navy, Air Force, Marine Corps, and the Coast Guard. Each branch does still have its own holidays observed, but make sure to thank anyone who is actively serving on Armed Forces Day (or really on any day for that matter) and let them know how much we appreciate them and their service.

May 27th, 2019 will no doubt be a day of BBQ’s and family gatherings (please be a sunny day). It is the unofficial beginning of summer! However, we should not forget though, the significance of this day. May 27th, 2019 is Memorial Day. Whereas on the 18th we were appreciating those who are currently serving our country, the 27th is meant to be a day to of honor and remembrance, of all deceased veterans of all the wars fought by American forces.

As Time.com points out, “the holiday, originally known as Decoration Day, started after the Civil War to honor the Union and Confederate dead.” “The final event that cemented the modern culture of Memorial Day in America was in 1968 when Congress passed the Uniform Holiday Act, designating Memorial Day as the last Monday in May rather than May 30, as it had previously been observed.”

So, while we are appreciating the (hopefully) warm weather, enjoying the company of those around us, remember those who fought and died for our country. Those who dedicated some portion of their lives to the service of our country.